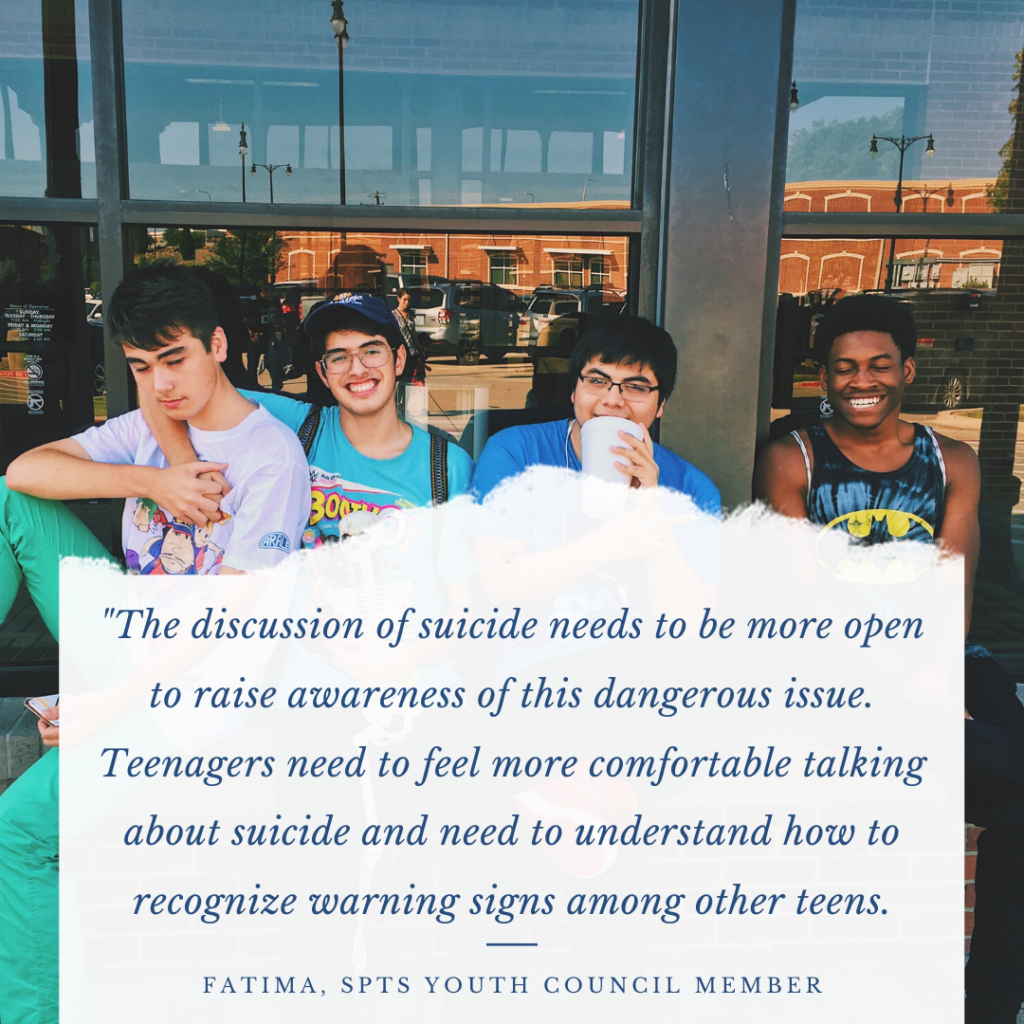 Suicide: A Topic Worth Talking About

The following essay was written by SPTS Youth Council Member and high school student, Fatima, who wishes teenagers would feel more comfortable talking about suicide to help spread awareness and identifies the stigma surrounding mental health as a barrier to getting people help. We want to thank Fatima for using her voice and speaking up about suicide prevention through this essay.

As a member of the SPTS Youth Council, Fatima meets monthly with other high school students from all across Monmouth and Ocean Counties to participate in activies, games, discussions, and more run by SPTS Clinical Director, Susan Tellone, RN, BSN, CSN, MSN. To learn more about the SPTS Youth Council, please visit: www.sptsusa.org/youthcouncil.

Suicide: A Topic Worth Talking About

Regarding mental health, particularly suicide, secrecy is often fatal. High schoolers may find it hard to believe that suicide is the second-leading cause of death for people ages 15 to 24 (American Psychological Association). This alarming rate continues to terrorize the country, as teenagers are reluctant to talk about this important subject. Suicide is a topic that desperately needs to be talked about among the teen audience because it is rapidly killing them. The discussion of suicide needs to be more open to raise awareness of this dangerous issue. Teenagers need to feel comfortable talking about suicide and need to understand how to recognize warning signs among other teens.

The stigma around mental health prevents discussion about suicide, a topic that is necessary to discuss to guarantee teens have the support they need. Talking about suicide is difficult, but it is vital to discuss for teens struggling with their mental health. Teens are hesitant to speak on this matter because when someone, unfortunately, takes their own life, it is commonly described as they ‘committed’ suicide. The word ‘commit’ has a negative connotation, for that word is often associated with crimes. Suicide is not a crime however, it is a topic that teens need to feel comfortable discussing. Dr. Betsy Kennard who has a doctorate in psychology comments on the stigma that surrounds mental health, particularly suicide. One finding, in particular, originates from a study she helped administer for the UT Southwestern Children’s Medical Center. The experiment focused on an intervention including one group that had a discussion of suicide daily, compared with a group that had little intervention. The goal of the study was to prove that when teens receive guidance and discuss their mental health, it would reduce their rate of repeated suicide attempts. Successfully, the study showed, “teens who received the intervention experienced subsequent suicide attempt at a rate of 16 percent, whereas teens who did not receive this intervention had a reattempt rate of 31 percent” (Kennard). The study’s statistics thoroughly shows how important it is to talk about one’s mental health state regularly with teens to guarantee they have the support they need. Parents and friends need to put away this strong fear of judgment when addressing suicide. One conversation about this topic potentially has the ability to save a precious life. Talking about suicide is admittedly tough, however, it is crucial to get support for oneself at what could be a very challenging time.

For progress to occur, along with discussion must come the ability to recognize warning signs. This is important because recognition is key in helping someone who is struggling with their mental health. A teen who is contemplating taking their own life might “talk about feeling hopeless or feeling guilty … [lose] the desire to take part in favorite things or activities” and “engage in risk-taking behaviors” (Lyness). Key indicators may tell when someone is at risk for suicide, therefore it is important that they are not missed. Teenagers and their community should understand that when looking for signs of deteriorating mental health within a teen it is vital to note their talk, behavior, and mood. Talk refers to the circumstance where the teen talks about giving up, feeling hopeless or unbearable pain. Behavior can be viewed as teens losing interest in activities, aggression, or isolation. Furthermore, mood applies to depression, anxiety, and hopelessness. These three indicators are crucial in detecting whether a loved one needs help. It is critical to note that some teens may be more at risk than others. Potential breaking points include “after a stressful life event, such as problems at school, a breakup with a boyfriend or girlfriend, the death of a loved one, a divorce, or a major family conflict” (Lyness). At these times, teens are emotionally unstable and a number of dangerous thoughts might come to mind. It can be argued that in most cases, suicide can be prevented. It is efforts such as attentively watching teens after suffering a traumatic event that can end up saving a life. Without question, if someone knows of a friend or family member that exhibits these traits, it is their duty to get that person the help and resources they need. Being alert to these risk factors, in the end, can prevent a teen from taking their life. It is everyone’s responsibility to recognize these red flags in a teen that is struggling with their mental health, for these indicators are a cry for help.

Suicide kills so many precious high schoolers on a daily basis. Suicide attempts among young people continues to be an urgent problem in America,Sui and around the world. For this reason, the stigma around mental health cannot prevent discussion any longer. Teenagers should feel comfortable discussing suicide and note how to recognize warning signs among other teens. An open discussion about suicide has proven to reduce reattempt rates. Moreover, being aware of these key indicators allow for a teen’s support system to call attention to their struggle with mental health. Both discussion of suicide and learning to identify warning signs are efforts to ensure teens are receiving the help they need regarding suicidal thoughts. As teenagers, it is our duty to be advocates for our friends and loved ones. Joining together, we can decrease the teen suicide rate and spread awareness of the subject matter.

The post Suicide: A Topic Worth Talking About appeared first on SPTS.

This article was originally published in SPTS. Click here to read the Original Article