There have been approximately 19,000 euthanasia deaths in Canada.

I estimate that there have been approximately 19,000 deaths by euthanasia and assisted suicide in Canada since legalization. Here is how I come to that number. 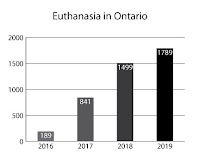 In July, 2020, Health Canada released the first annual report on (MAiD) euthanasia and assisted suicide. The data was gathered from the reports submitted by the medical practitioners who caused the death. There is no requirement that a third party or neutral person submit the euthanasia reports to ensure accuracy.
Article: Analysis of Canada’s 2019 MAiD annual report (Link).

The report provided information on the 2019 Canadian MAiD deaths. According to the report:

Based on the fact that the Health Canada report indicated that there were 5631 reported MAID deaths in 2019. It is reasonable to estimate that there have been approximately 19,000 assisted deaths in Canada since legalization.

In September 2019, Quebec Superior Court Justice Baudouin, struck down the requirement in Canada’s euthanasia law that a person’s natural death be reasonably foreseeable and the court gave the federal government six months to amend the law based on the Truchon court decision. The government did not appeal the decision.

On February 24, the federal government introduced Bill C-7 in response to the Quebec Court decision striking down the requirement in the law that a person’s “natural death be reasonably foreseeable” before qualifying to be killed. Due to the prorogation of parliament, Bill C-7 was re-introduced on October 5, 2020.

What changes does Bill C-7 make to the law?

1. Bill C-7 removes the requirement in the law that a person’s natural death must be reasonably foreseeable to qualify for death by lethal injection. Therefore, people who are not terminally ill can die by euthanasia. The Quebec court decision only required this amendment to the law, but Bill C-7 went further.

2. Bill C-7 permits a doctor or nurse practitioner to lethally inject a person who is incapable of consenting, if that person was previously approved for assisted death. This contravenes the Supreme Court of Canada Carter decision which stated that only competent people could die by euthanasia.

3. Bill C-7 waives the ten-day waiting period when a person is deemed to be “terminally ill.” A person could request death by euthanasia on a “bad day” and die the same day. Studies prove that the “will to live” fluctuates.

If Bill C-7 is passed, a future court decision will strike down the 90 day waiting period for people whose natural death is not reasonably foreseeable because, it would be argued that this provision represents an inequality in the law.

5. Bill C-7 falsely claims to prevent euthanasia for people with mental illness. The euthanasia law permits MAiD for people who are physically or psychologically suffering that is intolerable to the person and that cannot be relieved in a way that the person considers acceptable.” However, mental illness, which is not defined in the law, is considered a form of psychological suffering.

Bill C-7 permits anyone who believes that their physical or psychological suffering to be intolerable to qualify for death by lethal injection, even if effective medical treatments for their condition exists, with a 90 day waiting period. (Link to Bill C-7)

The Canadian government must reject Bill C-7 and begin the promised 5-year review of the euthanasia law with an open view to what is actually happening rather than continuing to expand euthanasia, making Canada the most permissive euthanasia regime in the world.

This article was originally published in Euthanasia Prevention Coalition. Click here to read the Original Article