Heartbreaking: Parents balk as sibling asks for funeral for aborted sibling with Down syndrome

A series of disturbing posts on Reddit detail a mother’s decision to have a eugenic abortion, and the effect it had on her preteen daughter. Writing on the “Parenting” and “Abortion” subreddits, the woman laid out her plan to have a late-term abortion after discovering her child had Down syndrome.

In her first post, the woman explained she had four children, and was pregnant with her fifth. Because of “complications,” she decided to have an abortion. The post was deleted, but was able to be accessed through Removeddit.

She then followed up, explaining that the “complications” she mentioned actually constituted a diagnosis of Down syndrome.

“In our town in Germany there are no other families with a child with DS,” she wrote. “That means that when the child grew up they would have no playmates like them. There are no other parents we could talk to as well.” Asserting that her child with Down syndrome would have no future, she claimed this was another justification for her abortion. “[W]hile children with DS are seen as loveable I fear that when the child is 20,30,40+ they will be see as a burden. No one will hire them,” she said. “When my husband and I die, they would become a ward or one of our children would have to become the bearer of my responsibility.”

According to the woman’s post, she also rationalized that having a child with Down syndrome would upset her family’s comfortable lifestyle. “We are living comfortably. We have money to travel, to buy our kids nice things, to pay for several luxuries,” she continued. “But, a child with DS (more than likely) will have several heart, eye, lung, and other body problems. If they don’t the cost of special schooling would be tremendous.”

Finally, she summed up the crux of the argument: she just didn’t want a child with a disability. “We just don’t want to,” she concluded bluntly. “I know it seems cruel, but we just don’t want a disabled child. No one does. The stigma, the stares, the rejection is just too much to consider.” 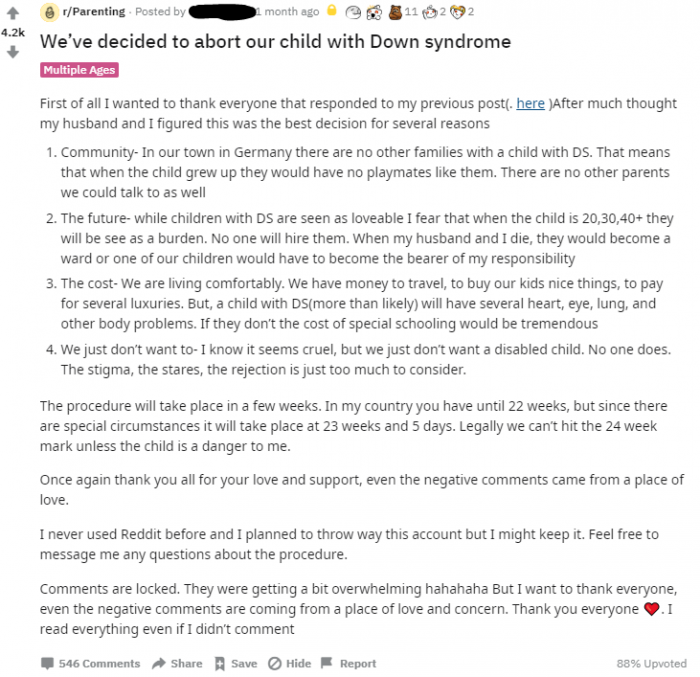 When one commenter pushed back against the idea of Down syndrome making abortion necessary, the woman claimed her child would suffer, and that allowing her child to live with a disability wasn’t something she would even do to a “dog.”

READ: ‘Nobody Told Me’: Book tells parents of children with Down syndrome of unexpected joys

Instead, she would be potentially submitting her child to a dilation and evacuation, or D&E, abortion procedure — the most common type for the second trimester of pregnancy. A D&E is particularly violent and takes several days. After dilating the woman’s cervix with laminaria, the woman must return to the abortion facility one to two days later, where her cervix will be manually dilated further. After emptying the uterus of amniotic fluid using a suction catheter, the abortionist then uses a sopher clamp — a grasping instrument with rows of sharp “teeth” — to literally tear the child apart limb from torso. The procedure is finished when the abortionist finds the child’s head and crushes it.

This takes place when the preborn child can likely feel pain. 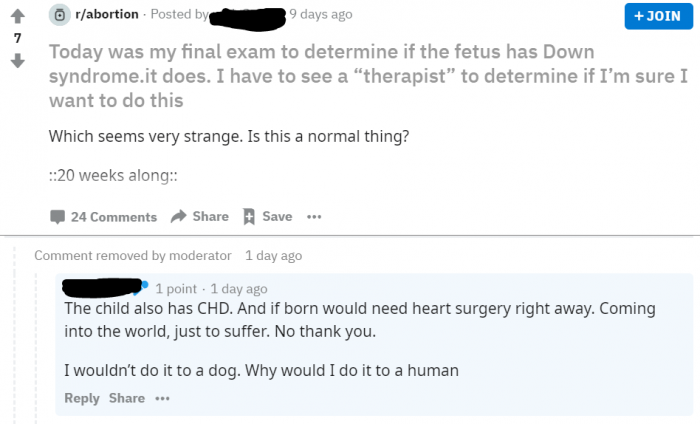 “She asked me what will happen with the body. I told her that we will donate it and the hospital in hopes to provide more research,” the woman wrote. “Today she asked me if we could have a funeral. ‘Nothing big. Just in the backyard. We can bury the ultrasound photo.’ For me I want to [sic] unconnected to this pregnancy and the idea of a funeral is not appealing at all. My husband feels the same way. He told her we would talk about it later. I’m considering letting her do it alone. But I don’t want to know where she placed the photos. However I think she would want my husband and I to join.”

She continued, “I don’t know how to explain to my daughter that I don’t consider this pregnancy as her sibling or my child and I don’t want to have a funeral for it.” 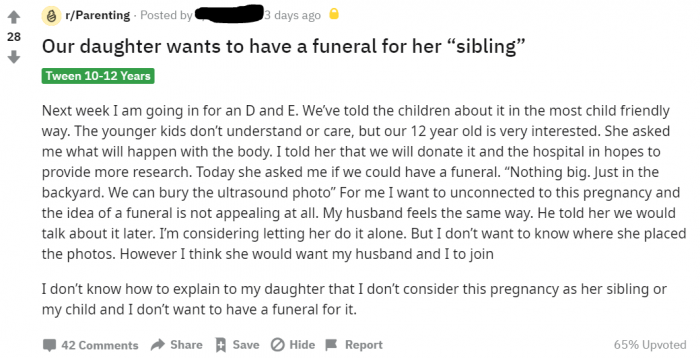 The situation is heartbreaking. This woman’s daughter is grieving the loss of her sibling, and must do so alone, without empathy or compassion from her parents, who have chosen to deprive their preborn child of his or her life and humanity. While this mother does not consider her “pregnancy” to be a child, scientific fact says otherwise, whether the mother wants to recognize it or not.

Additionally, the woman seems unaware of the message that her abortion decision sends to her living children. As soon as she deemed her child to be “defective,” she ended that child’s life. It tells the children who survived that they are expendable; that their parents’ love for them is conditional.

The post Heartbreaking: Parents balk as sibling asks for funeral for aborted sibling with Down syndrome appeared first on Live Action News.

This article was originally published in Live Action News. Click here to read the Original Article