Eventually, the motorist stopped to thank the peaceful prayer warriors for being out there. In his 20s, he accompanied a friend to abort her baby. Though the child was not his, the experience haunts him to this day.

Unfortunately, it wasn’t the man’s last brush with abortion. When his son got a girlfriend pregnant, the man didn’t object to the abortion of his own grandchild. 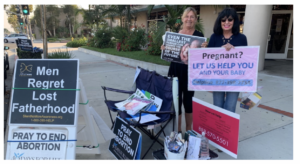 “Since that time, he was saved and knows God has forgiven him,” reported Laura, the local vigil leader. “However, he is still grieving the loss of his grandchild. Last year he watched Unplanned, and that is what opened his eyes to the truth about abortion.”

Laura and her team provided the still-mourning man with post-abortion healing resources. “It is a gift to be able to console and counsel people wounded by abortion during our vigils,” Laura said. “The Holy Spirit brings them to us.”