No, the Affordable Care Act is not the reason for a decline in abortion rates

Recently, abortion advocates made the misleading and erroneous claim that the Affordable Care Act (ACA) has caused a decline in the nation’s abortion rate. This is a familiar tactic; in recent months, social media users were also faced with claims that abortion declines more under Democratic presidential administrations than Republican. However, for both of these claims, the truth is exposed when reliable data is reviewed.

Donnica Moore, MD, took to Twitter on Monday with the claim that pro-lifers would be to blame if the ACA were undone, resulting in her predicted increase in abortions. “To all anti-RoevWade #SCOTUS justices, Senators & #AmyConeyBarrett: Good News, if you are really #AntiChoice. US #abortion rate fell considerably each year since #ACA was implemented. BUT: IF you overturn #Obamacare, you will PERSONALLY be responsible for INCREASING abortions!” she wrote.

In a second tweet, she claimed that her prediction is accurate because the “#ACA guarantees coverage of #contraception, including #IUD, with no copay or deductible. The more people who have reliable #birthcontrol, the fewer #abortions there will be.”

She’s wrong on both counts.

2. How’s that??? #ACA guarantees coverage of #contraception, including #IUD, with no copay or deductible. The more people who have affordable, reliable #birthcontrol, the fewer #abortions there will be. Questions? DM me. And talk to your kids about sex. https://t.co/Cy8QcEXp40

The ACA is not responsible for the abortion rate decline

While abortion rates are indeed in decline, this decline has been happening for decades. Overall, the U.S. abortion rate has dropped by more than 50% since 1980. The chart below from the pro-abortion Guttmacher Institute shows a consistent decline since that peak. The ACA was signed into law in 2010. 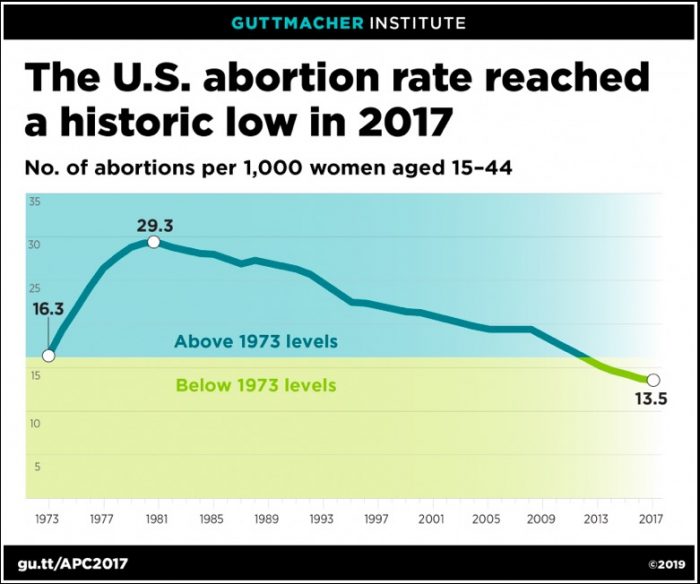 In an article for Live Action News, Dr. Michael J. New examined abortion rate data from the Guttmacher Institute which reports on abortion rate data from all 50 states, unlike the Centers for Disease Control and Prevention (CDC). Therefore, Guttmacher’s information is considered more complete than that of the CDC. The abortion rate, according to Guttmacher, has been declining since the year before President Ronald Regan took office in 1981.

READ: No, Democratic presidents do not cause large declines in the abortion rate

According to New, since the 1992 Supreme Court decision of Planned Parenthood v. Casey, states have had more control over their abortion laws. Republicans also made gains in many state legislatures during the Clinton and Obama administrations and many of these states have been actively passing pro-life laws. Pro-life laws help to reduce the abortion rate. In addition, the number of pro-life organizations offering assistance to pregnant women increased by 86% between 1988 and 2015.

“An important reason why the U.S. abortion rate has declined […] is because of the tireless work of pro-lifers,” wrote New. “Our educational, service, and legislative efforts are paying dividends.”

In addition, two separate studies have shown that more than half of the women seeking abortion report using birth control during the same month that they became pregnant.

The study published by the pro-abortion British Pregnancy Advisory Service found that 51.2% of women who sought an abortion in 2016 were using at least one form of contraception when they became pregnant, and 24.2% of those women used a hormonal method — birth control pill, patch, ring, injectable, or implanted birth control.

The abortion rate began declining long before the Affordable Care Act was created and will likely continue to decline even if the Affordable Care Act should be replaced, as long as pro-life politicians are elected, states continue to enact pro-life laws, and pro-lifers are still able to assist women facing unplanned pregnancies through the pregnancy help centers that abortion advocates so desperately want to shut down.

The post No, the Affordable Care Act is not the reason for a decline in abortion rates appeared first on Live Action News.