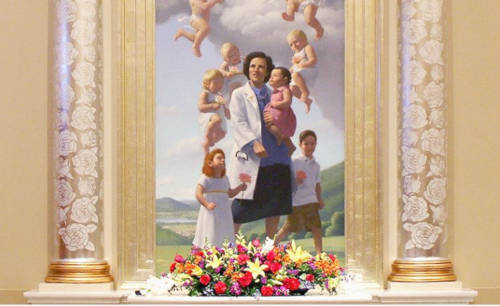 Shortly before their 1955 marriage, Gianna wrote to Pietro: “Love is the most beautiful sentiment that the Lord has put into the soul of men and women.” In the next four years the Mollas had three children: Pierluigi, Mariolina, and Laura. Two pregnancies following ended in miscarriage.

Early in her sixth pregnancy, doctors discovered that Gianna had both a child and a tumor in her uterus. She allowed the surgeons to remove the tumor but not to perform the complete hysterectomy that they recommended, which would have killed the child. Seven months later in April 1962, Gianna Emanuela Molla was born at the hospital in Monza, but post-operative complications resulted in an infection for her mother. The following week, Gianna Molla died at home in Mesero, where she was buried. Her daughter, Gianna Emanuela went on to become a physician herself.

Gianna Beretta Molla was beatified in 1994 and canonized 10 years later. Her Liturgical Feast Day is April 28. She is the patron saint of mothers, physicians, and unborn children. Read more about her here.